When you book with an account, you will be able to track your payment status, track the confirmation and you can also rate the tour after you finished the tour.
Sign Up

Or Continue As Guest

When you book with an account, you will be able to track your payment status, track the confirmation and you can also rate the tour after you finished the tour.
Sign Up
1427

Why Book With Us?

Questions? Do you want to book now?

Don’t esitate to contact us. We are a professional Team happy to speak with you.

Book Now Your Trip in Italy

Naples is a city of art and history: many artists from all over the world lived here.

Naples was found by the Greeks and then became part of the Roman society.

During our Untold History Tour, you will visit the Naples Archaeological Museum. Here you will see the amazing collection of frescoes and statues that were excavated in Pompeii and some nearby sites. The Museum also has some fabulous homoerotic pieces, including the statue of Harmodios and Aristogeiton, the male-male couple who were revered as the founders of the Athenian democracy.

The idea of love between men was deeply settled in the early Greek culture. Even Greek gods or heroes had affairs with men or boys according to the historical remains. Zeus for instance, leader of the pantheon, was renowned for his capture of Ganymede. In addition, Achilles and Patroclus were known for their prowess as warriors, by later poets and dramatists as lovers.

Athenian democracy began with the overthrow of the rulers known as the “tyrants”. As stated in Boswell’s “Same Sex-Unions in Pre-Modern Europe”: this overthrow was the base towards Greek democracy and it was narrated by Plato to two lovers, Harmodius and Aristogiton. 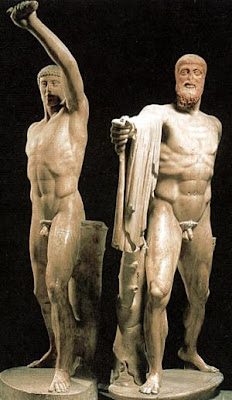 Athens at the time was under the control of two tyrants, the brother Hipparchus and Hippias. Hipparchus made a pass at Harmodius, which was rejected…After he had been rejected a second time, Hipparchus retaliated against him. Then the two lovers got up a conspiracy to overthrow the two. In later years, they were so famous that they were the first men ever to have statues built to them in the public square of Athens. They had images of those statues printed on the city’s coinage as well. These images has been identified with democracy in Athens in the same way as the Statue of Liberty, in New York. They were dedicated a popular song, recorded by Athenaeus 700 years later. Miltiades used their memory to inspire his troops before the battle of Marathon, saluting them as “Athens’ greatest heroes.” Callisthenes, described them as the most honored men amongst Athenians, because they destroyed one of the tyrants and the tyranny. Demosthenes called them “the men to whom, in requital of their glorious deeds, you have allotted by statute a share of your libations and drink-offerings in every temple and at every public service, whom, in hymns and in worship, you treat as the equals of gods and demigods”.
Plato clearly linked their action to their love, and had some harsh words against critics to their orientation –those whom we today would call the “homophobes”. Here’s Plato:
“Our own tyrants learnt this lesson. Through bitter experience, when the love between Aristogiton and Harmodius grew so strong that it shattered their power”.
Plato states clearly that the power of the tyrants was “shattered” by the strengthening love of two men. He continues with some observations about the origins of opposition to same sex love, which are pertinent to modern homophobia too:
“Wherever, therefore, it has been established that it is shameful to be involved in sexual relationships with men, this is due to evil on the part of the legislators, and to despotism on the part of the rulers, and to cowardice on the part of the governed. “
Homophobia originates in evil, despotism, and cowardice. Cowardice? But, wait, isn’t that typical of those weird queers, aren’t they the sissies? That’s not how the ancients saw it, and they had evidence on their side, evidence from the military record. The Greeks were familiar with male lovers amongst their heroes: from Zeus himself, head of all gods, who had abducted Ganymede to be his lover and cupbearer, through Achilles and Patroclus, celebrated by Homer for their bravery and for their love, and also Iolaus, companion of Hercules and participant in his celebrated labors, by whose tomb pairs of lovers were said to pledge their commitments to each other.
For reservations from 5 people on, please write to booking@quiiky.com or call +39 02 78622532 (from Monday to Friday, 9:00 to 18:00 UTC+1) for a taylor-made offer.

15 minutes before the tour starts

You will discover one of the greatest cities in Italy with a lot of history and the LGBTQ+ personalities that lived here during centuries.

Your gay-friendly guide will take you to see all the wonders hidden in this city and to one of the best museums of archeology in the world.

Enjoy the city where pizza was born and go along with our gay-friendly guide!

You will meet your gay-friendly guide 15 minutes before starting the tour. The guide will take you to the Museum of Archeology where he will show you all the hidden history of places like Pompeii. At the Museum you will be able to see all the sculptures that are very well-conserved.

Enjoy our Untold History Tour and discover the life in the ancient places.

Secret history of gay oppression under the red tree

From€130
3 hours
Availability : From Monday to Sunday
0
NEW!Lesbian Tour!

From€190
3 hours
Venice
0
2 travellers are considering this tour right now!